Human Rights Organization “Aswat” on the current situation of LGBTQI in Morocco.

Aswat is an independent non-profit group in Morocco, working on gender and sexuality issues related to sexual minorities. The group pursues a peaceful commitment to fight against discrimination against lesbians, gays, bisexual, transgender, transsexual and intersex in Morocco. The group operates two pages on facebook, “collectif Aswat” and “Aswat Magazine LGBT” and a website.  Guido Schäfer of Hirschfeld-Eddy Foundation has conducted the interview on June 1st, 2016. (Deutsche Übersetzung)

Hirschfeld Eddy Foundation (HES): The German parliament has decided on May, 13 to put Morocco on the so called list of “safe countries of origin”. In case this change becomes effective, this means for Moroccan applicants for asylum that a summary procedure applies in Germany which reduces the deadlines for decision, appeal and deportation each in general to one week only. This would significantly reduce the chance of a fair procedure. How safe is Morocco for LGBTQI?

Aswat: The situation of the LGBTQI community in Morocco depends on various factors (social class, education level, region in which they live …). But in all cases, these people live in permanent persecution whose manifestations are psychological trauma, the threat of imprisonment ending with the danger of death.

HES: In 2011 Morocco has adopted a new Constitution which also now guarantees the freedom of thought, ideas, artistic expression and creation. There is no mentioning of sexual identity, however, has there been any positive development for LGBTQI since 2011?

Aswat: The constitution of 2011 was the result of protests of the civil society, triggered by the desire for individual freedom. The result showed that civil society can be successful when it manifests its opinion.
This has had also an impact on LGBTIQ. In fact, cases of arrest that are reported by the media cause public protests which result in a reduction of sentences or a release. In case LGBTIQ are attacked in their homes or in public places, they are now considered to be the victims and not the offender. In case these arrests are not covered by the media sentences may range up to 3 years.

HES: How do LGBTQI person live their daily life? 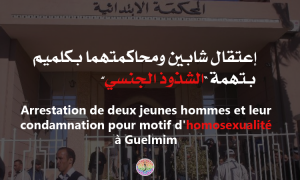 Aswat: Usually those of the LGBTIQ community are at young age already subject to mockery, aggression and violence, which leave them only a choice between forgetting their sexual orientation and “do as others”, assume and suffer the violence of society, family and state or live with many faces.

HES: Do you expect that the situation of LGBTQI in Morocco will enhance in the future?

Aswat: The answer to this question is difficult because one side of civil society is committed increasingly to protect the people of the LGBTIQ community. On the other hand a different part expresses more violently its homophobia.