The Yogyakarta Alliance: A postcolonial course of action 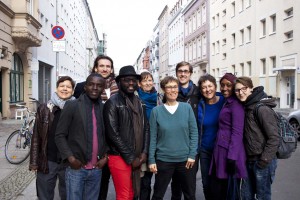 “No offense, but your countries came to our countries and violently took what wasn´t yours and left gay people outlawed.” This statement by Kenyan lawyer Imani Kimiri at a meeting of the Yogyakarta Alliance crystallizes the asymmetrical relationship between the countries of the North and the South.

Her position is informed by postcolonial theory. It sees colonialism as a major source of current global power relations, and a major reason behind the persecution of homosexuals in many African states. It seeks to move beyond the categories of thought that were typical of colonialism. It is indebted to deconstructionism, and critically examines the foundations of power. It is a call to critique the self, and to reflect on privileges and power relations. It focuses on representations, namely on ideas and images of the Other, plus the resulting interactions.

This critical approach was developed at universities, but is increasingly of interest to activists. What does it mean for political action? Postcolonial critical theory itself makes few if any recommendations. On the contrary, it considers the German government’s development cooperation policy, for example, to be seriously questionable.

Because it calls the foundations of power into question, postcolonial critical theory gives precisely those individuals who seek justice the impression that their attempts to achieve it in this global context can only go wrong, and so it is better to do nothing at all. As a result, high levels of caution and reserve are found especially among those who work for lesbian, gay, bisexual, transgender and intersex rights in the global South.

Activists who wish to promote LGBTIQ rights in Kenya, for example, need to speak with local partners on an equal footing – yet precisely that is what postcolonial analysis tells them is impossible.

The Yogyakarta Alliance is unique in its approach. Its guiding principle is “Do no harm – but do something.” We discuss current international topics with a constant focus on LGBTIQ human rights. In transnational exchange with activists, we raise awareness among German policy makers for LGBTIQ issues in the global South and East. Intersectionality is also important to us. We therefore seek to involve people of color and migrant groups in our work, and tackle racist aspects of the North-South dialogue.

The German Foreign Office and the Federal Ministry for Economic Cooperation and Development (BMZ) ask us for policy briefs. We maintain contact with organizations that put policy into practice, such as the Gesellschaft für Internationale Zusammenarbeit (GIZ). We are invited to workshops, and pursue international networking at conferences.

A core group of the Yogyakarta Alliance meets regularly in Berlin. Our meetings are open to all, with a special invitation to individuals active in development cooperation organizations, migrant associations, and faith-based aid projects.