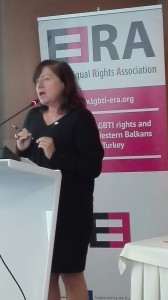 Only three weeks ago, I attended the United Nations General Assembly LGBT Core Group meeting, where global leaders discussed progress towards LGBT Equality, there I had the privilege to see activist Caleb Orozco from Belize. Hearing the story about how he managed to overturn the sodomy-laws in Belize by showing the court that these laws violated the principles of equality, dignity and personal privacy deeply impressed me. However, Orozco also talked about the backlash he experienced during and after this immense victory for LGBTI rights: Being in the eye of media and public attention, he was confronted not only with social exclusion, verbal abuse, but also death threats. Hearing this part of the success story made me realize once more that the fight for equality is far from over.

I can never emphasize it enough as is written in Article 1 of the Universal Declaration of Human Rights: “All human beings are born free and equal in dignity and rights.” Human Rights are neither about some people, nor many nor most people… No! Human rights are about all human beings! This means that LGBTI persons are protected under existing international human rights law in the same way as every other individual in this world.
States have the obligation to respect, protect and promote the human rights of all persons “without distinction of any kind, such as race, colour, sex, language, religion, political or other opinion, national or social origin, property, birth or other status.”

This conference is titled “Why laws are not enough”, stating the (obvious) fact that laws, in the end, are only worth the paper they have been printed on IF all the state – government, administration, judiciary and citizens – apply them… Underlining the importance of good government, rule of law, fight against impunity and corruption and an inclusive dialogue to get everybody “on board”. Meaning: Laws are important steps into the right direction. However, their implementation is as important, but tends to be often forgotten or worse: ignored.

In 2014, the German Federal Ministry for Family Affairs, Senior Citizens, Women and Youth established a new department, specifically for LGBTI issues. In the same year, an inter-ministerial working group on Intersexuality and Transsexuality was established. Germany also founded a program called “Live Democracy”, which supports the people on the ground who stand up and speak up for an open and diverse country. The program also encourages all German citizens to become active against hate and violence and to combat stigma and discrimination.

Yet, despite these successes, we have to realize that the fight for equality is an ongoing fight, and many steps still lay ahead of us. This is also true for Germany. As Mr. Brunner mentioned yesterday, we, for instance, have not yet achieved full marriage equality or adoption laws for same sex partnerships. 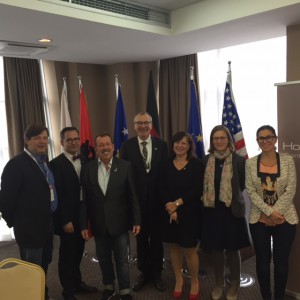 It is important to understand that inequality and discrimination affects everyone, not just those who suffer directly from these injustices. Frankly speaking, it is not enough if only LGBTI persons fight for their rights and equality. It is a task for society as a whole to challenge existing discriminations. Hence we have to commence and keep up the dialogue with all individuals and institutions, including (- not excluding-) those who believe that they can afford to ignore these injustices. We need a change of mindset which acknowledges that human rights abuses concern all of us.

This year, Germany and Mexico joined the United Nations LGBT Core Group. This group consists of a wide network of countries and civil society organizations. Its objective is to ensure a place for sexual orientation and gender identity issues on the UN agenda, to promote coordination and strategizing across countries in the Global North and South, and to prompt awareness of grievous human-rights violations against LGBTI people. The encounter with activist Caleb Orozco, which I mentioned in the beginning, took place at the First High-Level meeting of this Core Group during this year’s General Assembly of United Nations. A large number of head of states participated, demonstrating the huge importance of this topic on the international human rights agenda of the UN.

LGBTI rights have been, and continue to be, one of the key concerns of my office. I am very thankful that Germany (Hirschfeld-Eddy-Foundation) is co-sponsoring this event.
In 2014, my predecessor, Christoph Strässer, visited ERA Conference in Belgrade just a few weeks prior to Pride Parade. That year the parade was under a bad star, facing cancellation – as in previous years- due to security concerns. Fortunately, because of the continuous efforts and dedication of activists like you and pressure from the international community, it took place and has taken place ever since. Allowing LGBTI persons to exercise their constitutional rights (same rights!) : freedom of opinion & freedom of expression & freedom of assembly. That is why Strässer returned to Belgrade a few weeks later to participate in the Belgrade Pride Parade, showing our support to both: government protecting Human Rights and activists.

I am deeply humbled by your commitment to human rights and your willingness to fight for equality despite the danger, threats, public and familiar pressure and social exclusion, in which you put yourselves every day. I am also very happy for the opportunity to address you all and to be able to join the conference and hear from YOU about the situation of LGBTI-rights in the Western Balkans and Turkey.
Germany is committed to protecting those who fight for human rights. This also means that our embassies in this region and the European delegations can try to assist in troublesome cases, as well as serve as your contact persons, by helping to facilitate dialogue and building alliances.

I thank you once again for your endurance, commitment and courage and I hope that you keep up the fight, for all of us who believe in human rights. We will support you.
Thank You!