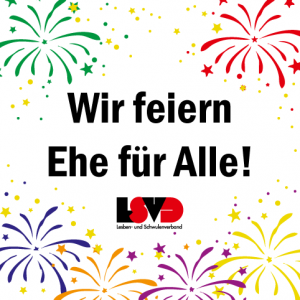 7th July 2017: The Same-Sex Marriage Act passes the Bundesrat on 7th July. The act passes both chambers without a change to the constitution.

28th June 2017: The Bundestag Committee on Legal Affairs recommends by majority vote that marriage should be opened to same-sex couples on the basis of the bill drafted by the Bundesrat.

27th June 2017: CDU and CSU permit their deputies to vote as they wish – there is no party whip on the vote.

26th June 2017: In a TV panel discussion, Chancellor Merkel softens her opposition to same-sex marriage and suggests the issue should be the subject of a free (conscience) vote in parliament.

25th June 2017: In his speech at the SPD party conference, SPD candidate for chancellor Martin Schulz vows he will not sign a coalition agreement that does not pledge to introduce same-sex marriage.

17th June 2017: At their party conference, the Green Party make same-sex marriage a condition of a post-election coalition.

April 2017: The LSVD adopts a resolution on its petitions for the Bundestag election 2017. Among other issues, we ask all the parties: do you undertake only to sign a coalition agreement if it contains a pledge to legalize same-sex marriage?

12th January 2017: According to a survey conducted by the Federal Anti-Discrimination Bureau, 83% of the population is in favor of legalizing same-sex marriage.

28th September 2015: Hearing in the Bundestag Committee on Legal Affairs on legalization of same-sex marriage. Manfred Bruns, spokesperson for the Lesbian and Gay Federation in Germany, participates as an invited expert.

25th September 2015: On the initiative of Rhineland-Palatinate, the Bundesrat once again adopts a bill on the right of same-sex couples to marry.

June 2015: After the referendum in Ireland, the LSVD and Campact launch an online petition calling for the introduction of same-sex marriage in Germany. Over 100,000 people sign.

May 2014 : With its initiative “Constitution, Not Gut Instinct” (translator’s note: a play on Chancellor Merkel’s citing her “gut instinct” as a reason for opposing equal adoption rights), the LSVD stages a protest in front of the Federal Chancellery for equal adoption rights.

23rd October 2013: The Linke (Left) Party introduces a bill into the Bundestag to legalize same-sex marriage.

Bundestag Elections 2013: The LSVD canvases the views of the parties on LGBTI* issues and publishes the replies. It also publishes an overall survey of voting records of Members of the Bundestag with respect to LGBTI* rights. Much is promised – also in a panel discussion with top politicians  on the subject “Marriage for all – now!” Among the pledges: “100 percent equality.” After the election, the LSVD demands that promises are kept, and stages a vocal demonstration for equal rights at the venue of the coalition negotiations taking place between CDU/CSU and SPD. The coalition agreement is, however, a disappointment.

6th June 2013: The Federal Constitutional Court publishes its judgment on the extension of the married couples’ tax regime to civil partnerships. The court demands fiscal equality, to be applied retroactively as of 1 August 2001. The principle of equal treatment applies to all citizens regardless of their sexual identity.

22nd March 2013: As the first constitutional body to do so, the Bundesrat votes to legalize same-sex marriage. On the day of the vote the LSVD demonstrates in front of the Bundesrat buildings in support of the initiative of Rhineland-Palatinate, Hamburg, Schleswig-Holstein and Lower Saxony. The Federal government, with its CDU/CSU and FDP coalition, ignores the vote of the regional chamber.

February 2013: The Federal Constitutional Court judges the prohibition of co-adoption of an adopted child (successive adoption) within civil partnerships to be unconstitutional.

2011: The Greens and SPD win the state elections in the southwest: ten years after the introduction of civil partnerships, Baden-Württemberg becomes the last state in Germany to permit civil partnerships to be registered at normal registry offices. On many other fronts also, the LSVD continues the struggle to eliminate inequalities at federal and state levels. A case in point: in 2011 North Rhine-Westphalia finally also accords civil servants in civil partnerships the same rights as married couples. The CDU/CSU and FDP Federal government continues to block progress.

7th July 2009: The Federal Constitutional Court takes a landmark decision on marriage, family and partnerships, bringing a breakthrough for equality.

1st January 2009: Success of the “No Half Measures” campaign: the law on inheritance tax reform comes into force, granting equal tax-free allowances to civil partnerships.

13th June 1st 2007: The LSVD initiates the “No Half Measures” campaign for fiscal equality of civil partnerships.

Summer 2004: Lobbying for expansion of the Civil Partnership Act and start of the campaign “Equal rights for equal obligations – the only fair way!”

17th July 2002: The Federal Constitutional Court determines that the Civil Partnership Act is compatible with the Basic Law, and confirms our view that the special protection of marriage in Article 6 (1) of the Basic Law does not prevent the legislature from granting rights and obligations to same-sex partnerships which are equal or close to those of marriage.

9th April 2002: Hearing before the Federal Constitutional Court on the constitutional case brought by Bavaria, Saxony and Thuringia against the Civil Partnership Act. The Court also officially gives the LSVD the opportunity to make a statement during proceedings – another major step towards normality in our country.

1st August 2001: The Civil Partnership Act comes into force. The LSVD congratulates the first homosexual couples who go to the registry office.

18th July 2001: The Federal Constitutional Court in Karlsruhe rejects the petition for a provisional injunction against the Civil Partnership Act, giving the green light to civil partnerships.

Summer 2001: In its campaign “In the name of the people: marry!”, the LSVD protests against complaints of unconstitutionality filed by Bavaria, Saxony and Thuringia. By filing an immediate injunction, they attempt to prevent the Civil Partnership Act from entering into force on August 1. They lose their case before the Federal Constitutional Court.

21st December 2000: The Netherlands become the first country in the world to legislate same-sex marriage. The law comes into force on 1st April 2001.

10th November 2000: The Bundestag votes in favour of the Civil Partnership Act. Ten years of persuasive campaigning by the LSVD have paid off. Our association has succeeded in getting public opinion on its side.

3rd August 2000: LSVD demonstration in front of the CDU party center in Berlin, which plans to launch an anti-civil partnership campaign titled “Yes to Tolerance, No to Marriage!” The Union sticks officially to its “No” to civil partnerships, but soon afterwards quietly drops its public campaign.

4th July 2000: The pressure on the government parties is successful: the SPD and Green parliamentary groups unanimously agree to introduce a joint civil partnership bill into the Bundestag.

1999/2000: The LSVD steps up pressure on the government. Together with six other nationwide associations, the magazine “Queer” and the Internet magazine “Eurogay”, a postcard and email campaign is launched calling for recognition of same-sex couples.

30th March 1999: With its call for “Equal Rights for Equal Love”, the LSVD launches its “Say I DO” campaign. The goals are to achieve equal rights for gay and lesbian couples with married couples, and full societal recognition of same-sex lifestyles.

17th January 1999: Together with other associations, the SVD organizes protests against a pastoral letter of Catholic Bishops that describes recognition of homosexual couples as “harmful to people” and “destructive of society”.

14th May 1997: The first official hearing on the legal recognition of gay and lesbian couples is held in the Bundestag Committee on Legal Affairs. Manfred Bruns, as an invited expert, presents the SVD position.

Summer 1991: The SVD (today LSVD), together with the Gay Lawyers’ Association, publishes a draft law on “The introduction of the right to marriage for persons of the same sex”

1990: In its first program of principles, the Gay Federation in Germany (SVD, today LSVD) calls for the right to marry for same-sex couples

1989: Denmark is the first country in the world to introduce civil partnerships for same-sex couples.

End of 1980s: Volker Beck, Günter Dworek and Manfred Bruns publish several papers calling for the establishment of a legal institution for same-sex couples – the first time such a call has been made in the Federal Republic of Germany. They judge the marriage ban for lesbians and gay men to constitute severe discrimination, and emphasize the importance of recognition of lesbian and gay partnerships to emancipation and acceptance within society.