Secretary Pompeo´s “Commission on Unalienable Rights”.Hirschfeld-Eddy-Foundation cordially invites you to a Web-talk with Mark Bromley, Chair of the Council for Global Equality (CGE) about the Trump adminstration´s attempt to redefine Human Rights.

“Pompeo’s clear interest is to undermine the growing consensus that universally accepted human rights can be claimed by all vulnerable minorities, including LGBTI people and women who wish to control their own bodies.” Julie Dorf, Council for Global Equality

Until recently, clear progress had been made in the movement towards women´s rights and the human rights of LGBTI people. In the UN and other multilateral institutions the United States had a global leadership role regarding the rights of LGBTI people. Along with other states, the US always voted in favor of these rights. But now the U.S. appears to have changed sides.

END_OF_DOCUMENT_TOKEN_TO_BE_REPLACED

Tim B. Agaba and Clementine E. Burnley are both emerging writers. They met in a fairly random way. On the first day of Ms. Chimamanda Ngozi Adichie’s Purple Hibiscus Trust (PHT) Creative Writing workshop (which has followed on from Farafina Workshop) they sat next to each other while Ms. Adichie battled through Lagos traffic.

END_OF_DOCUMENT_TOKEN_TO_BE_REPLACED

This Web-event will take place in English.

Hirschfeld-Eddy-Foundation and InterKontinental cordially invite you to a Web-Talk about Queerness, Space and Human Rights with Clementine Burnley and Tim B. Agaba.

In a sense a writer is always on the move, between contexts, between perspectives and historical moments. Sometimes the writers movement takes them through different geographies and sometimes the writer stays in the same place, while the characters the writer creates travel in the writers’ place. During the online event Clementine E. Burnley and Tim B. Agaba will consider their own writing lives.

END_OF_DOCUMENT_TOKEN_TO_BE_REPLACED

Black lives matter! — demonstrations are taking place in countless cities on multiple continents. People are taking to the streets in memory of George Floyd and others to call for an end to racist violence. In Germany the terrorist attack in Hanau has shocked and unsettled precisely those who are affected by racism. Many fear becoming the object of violence themselves.

Racism is a violation of human rights. It includes the fostering of fear, or any action that has the purpose or effect of nullifying or impairing the recognition, enjoyment or exercise of human rights, according to the UN Convention on the Elimination of All Forms of Racial Discrimination (ICERD) adopted in 1969.

END_OF_DOCUMENT_TOKEN_TO_BE_REPLACED

If an international ministerial is convened to discuss a single human right, that must be a very special human right indeed. All the more so if the ministerial is hosted by the US government, which otherwise keeps its distance from such gatherings. In 2018 the US withdrew from the UN Human Rights Council, and has recently stopped funding the World Health Organization (and is even obstructing the work of the World Trade Organization). However, Washington has now held two international “Ministerials to Advance Religious Freedom”, in 2019 and 2018. Germany was represented by a delegation that included a state secretary from the CSU-led Ministry for Economic Development and Cooperation (BMZ).

The Hirschfeld-Eddy Foundation has therefore sent a letter to the BMZ, warning it against privileging freedom of religion above all other human rights. We also reminded the BMZ that freedom of religion includes the right not to have any religion, and that LGBTI people are regularly prevented from practicing their religions, for example when they are unwelcome at churches.

END_OF_DOCUMENT_TOKEN_TO_BE_REPLACED

Thank you very much for the invitation to speak here, which I greatly appreciate. It is wonderful to see that the Kirchentag has had a Rainbow Center for many years now. That is an important step – just like events such as this one today.

My talk will consist of four theses. The first comes from a text written by Tim Kuschnerus, the managing director of the Protestant office of the Joint Conference Church and Development (GKKE), for the blog of the LSVD (Lesbian and Gay Federation in Germany): “The Christian churches are part of the problem. This realization can lead to only one conclusion in my opinion: churches, and by that I mean primarily their development organizations here in Germany, must work toward becoming part of the solution.”

END_OF_DOCUMENT_TOKEN_TO_BE_REPLACED

Landmark judgment on decriminalization in Botswana

Good news from Botswana – on 11 June 2019 the country’s High Court lifted the ban on homosexual practices! Activists at the courtroom in the capital city of Gabarone broke into cheers and waved rainbow flags.

This landmark judgment, which resonates well beyond the borders of Botswana, will hopefully serve as a model in Africa and other Commonwealth nations! Our congratulations to the lesbians, gay men and bisexuals of Botswana and especially to the LEGABIBO organization (Lesbians, Gays and Bisexuals of Botswana), because it was instrumental in filing and successfully representing the case.

END_OF_DOCUMENT_TOKEN_TO_BE_REPLACED 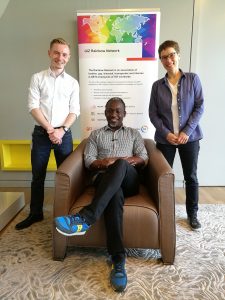 The ruling came after years of legal action, advocacy and community-building by LEGABIBO, Botswana’s largest LGBTI organisation, and its allies.

A quick review of the event by Felix Reimer, GIZ Rainbow Network:

END_OF_DOCUMENT_TOKEN_TO_BE_REPLACED

Proposed by the Hirschfeld-Eddy Foundation

The Hirschfeld-Eddy Foundation was launched in 2007 as th­e human rights organization of the Lesbian and Gay Federation in Germany (LSVD). It supports non-governmental organizations (NGOs) in countries of the global South and East by calling for donations and giving all funds collected to these NGOs.

Another key focus is to raise awareness of the situation of LGBTI people among policy makers and the public. Long-term contact with our partner NGOs is crucial for international work on human rights.

Decriminalization of homosexuality and trans identities is a major aim of the Hirschfeld-Eddy Foundation’s efforts, as is the protection of intersex people against medical procedures without their consent.

In recent years people all over the world have become increasingly aware of serious human rights violations against LGBTI people. There are now numerous important multilateral state initiatives as well as a growing civil society movement worldwide.

The Hirschfeld-Eddy Foundation is one of the few organizations in Germany that focuses exclusively on these issues. We are often asked what a united international approach to decriminalization and human rights for LGBTI people would look like, so we have compiled some basic guidelines here.