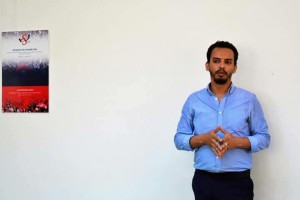 Interview with Badr Baabou, president and co-founder of “Damj” on the current situation of LGBTQI in Tunisia (Interview auf Deutsch)

Hirschfeld Eddy Foundation (HES): Hello Badr. Tunisia is the only country in which one has the impression that the so-called Arab spring, which started in Tunisia in 2010 with so much hope, has led to an improvement in the human rights situation. How has this impacted on the situation of LGBTQI?

Badr Baabou: Unfortunately, the situation of the LGBTQI community is not good. LGBTQI still experience discrimination in everyday life, violence and arbitrary arrests. To be gay in Tunisia, is a crime and will be punished under Tunisian law. Under article 230 of the Penal Code, sodomy is punishable with three years prison (Note: also same-sex sexual acts are understood under sodomy in many Arab countries, especially between men).

HES: And this provision is applied in practice?

Furthermore, in December 2015, six young men were sentenced to 3 years in prison for their homosexuality.

HES: But there is yet a new Constitution, which stresses the human rights. How does that fit together?

Badr: Yes, we have a new Constitution, which applies since beginning 2014. Actually, the Constitution emphasizes the respect of human rights, freedom of speech and the protection of privacy. Article 230 is in obvious conflict with these principles and fundamental human rights. But the Tunisian society denounces the unconstitutionality of that provision. Tunisia is just in the process to set up its first Constitutional Court and Damj would like to take this opportunity, to abolish this repressive legislation involving the Parliament.

Badr: Generally yes. But it is still a long way until our society opens. Unfortunately, there was a wave of anti-LGBTI comments and violence in April. It started with homophobic comments of an actor in the Tunisian television, followed by homophobic messages in social media, some with threats of violence. Shopkeepers and taxi drivers posted signs in which the refused to provide service to LGBT customers.

HES: The plan of the Federal German Government, to treat Tunisia as a safe country of origin, does not fit to your descriptions. Tunisia is probably anything but a safe country for LGBTI.

Badr: Damj sees the planned inclusion of Tunisia in the list of safe countries of origin with great concern. This decision will have a dramatic impact on LGBT asylum seekers from Tunisia. We can only tell the German authorities that Tunisia is not a safe place for LGBTIQ. The members of the community are facing stigma and discrimination everywhere in their everyday life.

Guido Schäfer has conducted the interview by the Hirschfeld-Eddy Foundation on May 10, 2016.

“Damj, l ’ Association tunisienne pour la justice et L ’ égalité” was founded in Tunisia in 2010. Damj means inclusion. The nonprofit and registered association aims to spread the culture of universal human rights in Tunisia. This includes in particular the desire to enshrine the principles of the equality of citizens of Tunisia and the fight against all kinds of stigma and discrimination against minorities. The focus is on improving the life of LGBTIQ in Tunisia. In addition to lobbying, Damj offers the opportunity for networking and consulting.