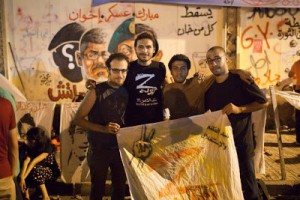 “Zwewla” — An art project in Tunisia

Walking with Oussama through the narrow streets of Tunis’ old Medina, it quickly becomes apparent how he continuously connects with people in his hometown; he is a very communicative and open-minded guy.

Oussama describes himself as an “Artivist”, implying a form of activism that expresses itself by means of arts.Together with his friends, he founded the group of „Zwewla“ (tun dialect: “the miserables”). The Zwewla wants to change the situation of the Tunisian society by using art as its medium: graffiti, music and dancing are only some examples. Members of the group believe that the principle of “support instead of Punishment” provides the most effective strategy to achieve their goals: Support through better education, improved public health and the protection of minorities, including, but not limited to LGBTIQ.

Their art projects address these topics artistically, communicating in each of them the imperative for social change. Oussama is part of a network of Tunisian, but also Egyptian-based artivists, who are in turn members of a broader artivists-network, stretching all the way to Germany and the Ukraine. Last year, he was invited to a festival in Augsburg, Germany.

At the same time, the realization of Oussama’s work In Tunisia proves to be difficult: In 2012 he was arrested for his graffiti with the message: “the people want the right of the poor”. The political message rather than a violation of property rights led to his arrest. After public protest, he fortunately was released after a few days. 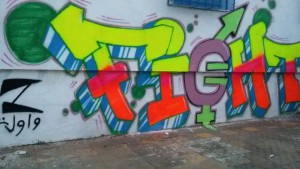 The work of Zwewla is appreciated and well accepted within the Tunisian society. Therefore, Oussama together with other artists and underground groups,wants to bring the idea of artivism to a “next level”. In order to achieve this, he is currently registering an association that intends to provide a platform that allows for a more effective contribution of other artivists to induce legal and social changes in Tunisia.

At the moment, Oussama participates in workshops arranged by Netzwerk Politikatelier e.V. in cooperation with the Hirschfeld-Eddy-Foundation and funded by ifa, Institut für Auslandsbeziehungen. The workshops take place in Tunis and deal with website content development and professional writing. About 10 Tunisian Human Rights Defender are participating. Guido Schäfer of Hirschfeld-Eddy-Foundation spoke to Oussama in the course of this project.