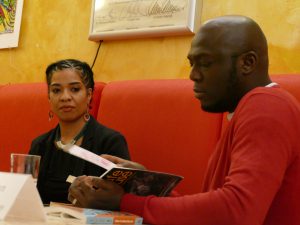 Right at the start, Popoola disagreed with the view that Africa treats LGBT people that poorly and the West treats them that well. She described how the Nigerian audiences at her readings responded very openly and showed no bias toward trans* topics. Trans* aspects of her book were not discussed at interviews. Cultures of acceptance are found everywhere.

Olumide Popoola and Elnathan John were invited to discuss strategies against homophobia and transphobia in Nigeria at the Afrika-Haus in Berlin on 7 December 2017. The podium discussion addressed cultures of acceptance, the role of (Diaspora) literature, and sensible ways of supporting Nigerian activists from outside the country. Klaus Jetz, Executive Director of the Hirschfeld-Eddy Foundation, introduced the event by describing the foundation’s work with Nigerian organizations and activists. 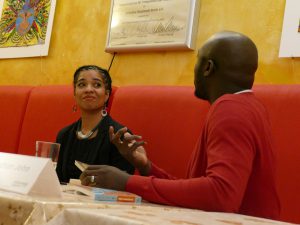 Elnathan John is a Nigerian lawyer, satirist and author. The German translation of his novel Born on a Tuesday has just been published. It tells the story of Dantala, a boy who becomes caught up in the increasingly violent conflict between Boko Haram and the Nigerian government in the northern part of the country.

A law that prohibits same-sex marriages went into effect in Nigeria in January 2014. John wrote about it in his blog and elsewhere. The president of Nigeria at the time, Goodluck Jonathan, stated that the law reflected Nigerian culture. John noted that although this view is very widespread, it is based on a very narrow interpretation of culture. There are many examples of homosexual men in Hausa society whose social gender is female, such as the yan daudu. The yan daudu are accepted in society. One reason for this, according to John, is that they do not challenge hegemonic notions of masculinities and therefore do not represent a threat. John is currently teaching a seminar at Berlin’s Humboldt University on “Masculinities, gender-nonconformism and the Media in Northern Nigeria”.

The LGBT community must be at the forefront of political struggles

John would like to see the LGBT community join with other groups to form coalitions that work against problems like police violence and promote aims like good healthcare. The major issues have to be addressed, and addressed together. That also applies to outside support for the community. “Support coalitions, make sure they work together,” John urges. 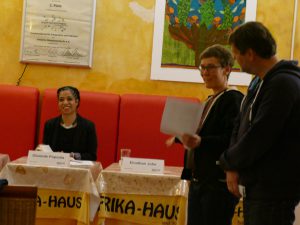 Nigeria has a wide range of initiatives and organizations and a huge number of activists. Some work on litigation, others on sexual health initiatives. Before support is set up from outside the country, it is extremely important to inquire among local people who are active on the grassroots level. They are the only ones who know what forms of support make sense. John and Popoola are skeptical about campaigns. Different types of activism rarely work well across borders, they say, and warn explicitly against well-intentioned global campaigns. Don’t immediately draft an online petition, but first talk with the people in the country and ask them what could be of help. Sometimes silence can help the most. If you do not have local contacts, people in the Diaspora might be able to provide them.

John and Popoola emphasized the importance of contacting local people when it comes to offering support. “Find the people on the ground and talk with them,” they urged. Evangelical churches have clear aims. When US-American churches, for example, support Nollywood productions and directors spend a lot of money on certain types of movies, they have an agenda.
John sums up the situation as follows: “We have homegrown homosexuality and we also have homegrown homophobia.”

This event was the fourth joint project by the Hirschfeld-Eddy Foundation and the Berlin Afrika-Haus as part of the Crossings & Alliances series, in this case also in conjunction with the InterKontinental agency for African literature. Many thanks to our partners.