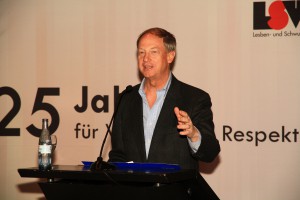 I would also like to introduce my wife, Kimberly, and our good friends, journalist Linda Douglass and the U.S. Ambassador to Italy, John Phillips.

I am honored that you have invited me to share some thoughts with you at this birthday celebration.  I have often said that the last, great civil rights challenge is for equality and non-discrimination of our LGBT community.

Here in Germany, as in the United States, great progress has been made in removing unjust barriers that have prevented the full realization of the basic human rights of gay, lesbian, bisexual, and transgender persons.  But there is still much work to do.

In the United States, slavery was written into our Constitution before it was written out.   The struggle for equal rights, for women, for the LGBT community, and for ethnic and religious minorities is an ongoing struggle, globally.  Though governments bear special responsibility in pursuing change and greater protection for the human rights of their citizens, history has shown that they must be pushed.  And the responsibility for changing hearts and minds lies with all of us.

Whether here in Germany, or in the United States, we have seen that change happens when people stand up and show solidarity.  This demands courage and commitment and character; the kind of character that has been demonstrated by every one of you, the members and friends and supporters of the Lesben- und Schwulenverband Deutschland.

Working in conjunction with government, together with partners from civil society, faith communities and the private sector, you are on the frontlines of the struggle to ensure equality and dignity for all.  Ongoing legislative initiatives such as “Keine halben Sachen” and “Aktion 3+” are vitally important.  My wife Kimberly is on the international board of the Human Rights Watch.  One of the most important goals of this organization is to promote the implementation of equal rights around the world.

But the battle for full human rights for gay, lesbian, bisexual, and transgender persons must be won not only on the floor of the Bundestag, or the U.S. Congress and Supreme Court, or the UN General Assembly or Human Rights Council, but also in the streets and public squares of our towns and cities, in classrooms, in workplaces, and in the living rooms and around the kitchen tables of our families and friends – and ultimately in the hearts and minds of people.

As many of us have found through our own personal journeys, and through those of our loved ones, there is a deep sense of justice in the minds of our friends, our families, our colleagues, and our neighbors.  The more members of our shared community are visible, are heard, are free to be open about who they are, the more this innate sense of human justice will prevail.
And by setting examples in the workplace, we can open hearts and minds. I am proud to say that at the State Department and at every U.S. Embassy and Consulate around the world, we have made it a priority to ensure that LGBT spouses and families are entitled to the same treatment overseas as any other diplomat; and that LGBT partners receive the same benefits and protections as straight couples.

Speaking more broadly about the work of the State Department, let me emphasize that protecting universal human rights is at the very heart of our diplomacy.  At times in the history of both of our nations, there have been walls of misunderstanding and misperception.  But we have learned that we have a moral obligation to promote societies that are just, fair, and tolerant. It is not only the right thing to do; it is also a strategic necessity.  Greater protection of human rights leads to greater stability and prosperity.  As President Obama said in his speech at the Brandenburg Gate two years ago, “When we stand up for our gay and lesbian brothers and sisters and treat their love and their rights equally under the law, we defend our own liberty as well.”
Kimberly and I, accompanied here tonight by our friends, the U.S. Ambassador to Italy John Phillips and his wife Linda Douglass, have just come from the commemoration of the first meeting between Russian and American troops in the final days of World War II on the banks of the Elbe River.  Recalling stories about the sense of relief and joy of those war-weary soldiers, I spoke of the universal values of peace, freedom, social progress, equal rights, and human dignity that arose from the ash and smoke of the most terrible war in human history and from the tyranny of the Nazi Regime.  These principles were enshrined in the founding charters of the United Nations and other international institutions.  These documents expressed an optimistic vision, however, not a description of existing realities.  Sadly, this is still true today.

In many places around the world, trends are running in the opposite direction.  Given the progress that has been made in Germany, the United States, and many other countries, it would be easy to believe that story can be translated across the globe.  Unfortunately, in many parts of the world, progress in recognizing the innate, fundamental human rights of gay, lesbian, bisexual, and transgender persons has come too slowly, not at all, or has actually deteriorated.  Throughout the world, people continue to be killed, arrested, and harassed simply because of who they are, or who they love.  Governments continue to enact and enforce laws that discriminate against LGBT individuals and restrict their fundamental human rights.
Not surprisingly, the places where we face some of the greatest national security challenges today are also places where governments deny basic human rights to their people.  The struggle for rights and dignity couldn’t be more relevant to what we are seeing transpire across the globe. We have seen how national dialogue and democratic progress can make countries more stable and make them stronger partners for peace and prosperity.

In 2011, then-Secretary Hillary Clinton delivered a seminal speech which spelled out the U.S. Government’s view that LGBT rights are human rights, and human rights are LGBT rights.  It’s that simple.  There is no exclusive space in protecting essential human rights.

There is a broad and willing coalition already at work.  We support civil society organizations who are working on the frontlines to ensure equality and dignity for all. Through the Global Equality Fund – a partnership supported by the United States, Germany and 12 other like-minded governments, foundations, corporations and non-profit organizations – the Department of State has allocated more than $9 million for both emergency and long-term LGBT-related programming in more than 50 countries worldwide.

The annual U.S. State Department “Country Reports on Human Rights Practices” covers internationally recognized civil, political, and worker rights.  From Nigeria to Russia to Iran, indeed in some 80 countries the world over, LGBT communities face discriminatory laws and practices that attack their basic human dignity and undermine their safety.

Earlier this year, Secretary of State Kerry announced the appointment of Randy Berry as the first special envoy for human rights of LGBT persons.  The State Department has devoted considerable time and effort to developing a strategic response to anti-LGBT laws and practices; but that strategy has to be continually refreshed – and more importantly, has to be implemented. Randy Berry will be responsible for updating and building on this roadmap; and for driving a dialogue that will challenge those who reject the notion that the denial of LGBT rights is a fundamental human rights issue.

At our Embassies, we also carry on this work.  Here in Berlin, we have often used film and culture as a starting point for discussion.  For example, at the 2013 Berlinale, we held a roundtable with the American filmmakers, who happen to be friends of ours from Los Angeles, of the movie “Born This Way.”  This film shed light on the deteriorating LGBT situation in Cameroon.  Our Embassy made sure to invite the Ambassador from Cameroon.  Last year, Kimberly moderated a panel discussion with U.S. filmmaker Ira Sachs.  His wonderful film “Love is Strange” premiered at the Berlinale.  We have commemorated International Human Rights Day with film screenings and panel discussions on “LGBT Rights as Human Rights.”  And for the last four years, the U.S. Embassy has had its own float in the Christopher Street Day parade, on which Kimberly and I had a chance to ride last year.

But we cannot say we’re doing enough.  It is important that every single one of us keeps pushing and keeps believing in the change that we’ve been able to embrace – not only on Christopher Street Day or Human Rights Day or during the Berlinale, or on the birthday of the LSVD, but every day.  Because we all know the work is not done.  All the best – and Happy Birthday!